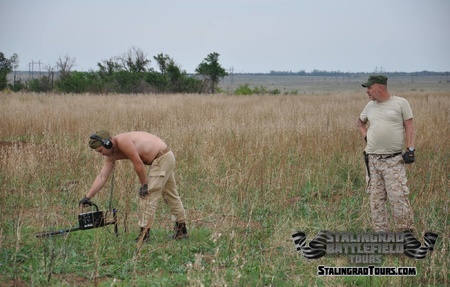 Every year hundreds of volunteers from all over Russia and other interested people from different parts of the whole world join together near Volgograd to discover remains of the heroes fallen defending their Motherland during the Battle of Stalingrad. Every year these excavation teams find thousands of Soviet/Russian soldiers.

We now extend our offer to you to participate for one or more days in the discovery and exhumation of these fallen Soviet heroes at the battle site to observe and assist in this solemn endeavor.  You will learn about the history of the Battle of Stalingrad that you could never learn from a book.

This is a non-profit organization led by former Russian Army soldiers who volunteer their time and energy to this task.  Each August, this group leads a group of volunteers in these excavations.  This is your opportunity to join them and be a part of this extraordinary experience.  The organization is licensed and have all the required permissions to undertake this project.  The excavations and exhumations take place on the steppe just west of Stalingrad where heavy fighting took place as the German 6th Army swept toward Stalingrad that August of 1942. Here literally died dozens of thousands of Russian soldiers and officers.

There are up to 100 participants in the excavation camp. We provide all neccessary equipment for your stay in the steppes (tents, blankets, sleeping bags, dishes, shovels, metal detectors) including the hot meals (breakfast, lunch and dinner).

After breakfast, teams of volunteers drive out to the battle site and begin the task of discovery and exhumations.  These Soviet soldiers dug foxholes and trenches in anticipation of the German advance.  These foxholes and trenches became their graves.  These Soviet soldiers have been hidden for 75 years until volunteers begin the task of discovery and respectful reburial.  By participating in this remarkable endeavor, you will work with fellow volunteers in each step of the process.   The task they have is not only to find  remains and personal belongings of Soviet soldiers but also to identify them and find the relatives of these heroes. But unfortunately, only about 5% of those who they find can be identified

This is a very important and painstaking work not only in the fields, but also sometimes lasting months and even years in archives with documents. The work of search teams also includes work on finding living relatives of these soldiers and establishing contact with them. Only after much work in identifying surviving relatives can the remains of fallen Soviet soldiers receive a proper burial in their hometowns or in a military cemetery.  The majority of the remains of Soviet soldiers cannot be identified.  These unidentified remains found during the excavations will be buried at the conclusion of the excavation season with honor in a mass grave at the memorial collective cemetery after a very touching and breathtaking farewell ceremony that you may join on the last day.

Day trips with visit of the sites of excavations are also could be available on other days by preliminary request and coordination with representatives of the search party (March-October).

The excavation tour can be perfectly combined with our three-day battlefield tour of Stalingrad.