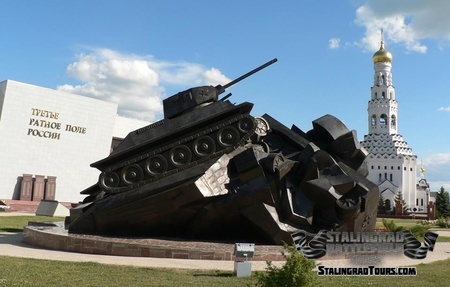 We are pleased to offer full explaratory three-day tour of Kursk Battle starting in Kursk with visit to the most significant historical sights around Kursk, Lgov, Rylsk, Vinnikovo, Ponyri, Svoboda, Vorobievka, Prokhorovka, Yakovlevo and Belgorod.

The beginning of a tour of the city of Kursk: inspection of the city's main attractions. Drive to Marino.
Tour of the palace and park complex "Marino". The palace was built as the main residence of the princely family Baryatinsky, ancient Russian noble family, and was conceived as a symbol of dignity and grandeur of the princely family. Until now, there has remained a magnificent stucco ceilings, marble fireplaces, pristine parquet, antique furniture items. The landscaped park today there are about 180 different species of trees. Great pond, dug his hands serfs of the prince, adorn the round and oval island with - 16-column rotunda (princely bath) and the Lutheran church.
Free time for lunch. Drive to Rylsk (10 km)

Tour of the ancient city of Rylsk (first mentioned in the chronicles under the year 1152), to keep the atmosphere of the old county town merchant. Sightseeing: Ivan of Rila Mountain - place of the city's founding, the Assumption (1811) and Basil (1822). Temples with the highest 50-meter bell tower, Church of the Ascension (1866), stayed at home where the Russian rulers Peter the Great and Alexander I, house Prince Shemyaka, shopping ranks 18th and 19th centuries, the mansions of the richest merchants of Rila - Shelikhov, Filimonov, Vykhodtsev and others, the monument "Russian Columbus" discoverer "Russian America" ​​GI Shelikhov, filming location of the Soviet film "Die Hard."
Return to Kursk.

Tour to Ponyri. Tour of the battle sites of the northern border of defence of Kursk salient. Visit monuments military glory: monuments signalmen, sappers, artillerymen. Inspection Teplovskiy heights from which in good weather can be seen Kursk - the main target of the German operation "Citadel". Visit the memorial and "Poklonnaya height of 269" with a sculptural composition "Angel of Peace"
Visit of Ponyri historical and memorial museum of the Battle of Kursk.
Visit of the memorial "To Heroes of the Northern FAS Kursk Bulge" on Victory Square in Ponyri and memorial exhibition at the train station Ponyri.
Drive to Svoboda.
Free time for lunch.
Visit to the museum "The command post of the Central Front" tour in the bunker of General KK Rokossovsky, where he in 1943 commanded a whole front.
Excursion to a functioning monastery - Kursk Root Nativity of the Mother of deserts with a visit to temples and holy springs. This is one of the oldest Russian monasteries (16th century) built on the site where more than 700 years ago was attained one of the most important shrines of the Orthodox world - Kursk Root Icon of the Mother of God "The Omen".
Return to Kursk.

Departure in Belgorod Region/Oblast.
Tour of the places of battles southern face of the Battle of Kursk.
A monument to lieutenant AK Gorovtsov (only Soviet pilot shot down in a dogfight 9 enemy planes).
A memorial to the Battle of Kursk in the village. Yakovlev (tankers monuments, gunners, pilots, the temple of St. George, the Armenian khachkars, Muslim Kaaba).
Drive to Prokhorovka.
Excursion in a museum "Third battlefield of Russia" opened in 2010. Visiting the memorial temple of Peter and Paul.
Free time for lunch.
Tour of the Prokhorovka field, where the July 12, 1943 held the largest tank battle. Belfry tour, busts of Russian generals, the exhibition of military equipment of Victory Park.
Drive to Belgorod.
Sightseeing tour of the capital Belogoriya: Cathedral Square, Drama theater, monument, MS Shchepkin, Holy Trinity Boulevard, the eternal fire, an area three museums, Victory Park, a monument to the Afghans, the Transfiguration Cathedral with the relics of St. Iosaf Belgorod and an icon of St. Nicholas PATH, which about 500 years old; a panoramic area with great views of the city, the monument of St. Vladimir Equal to the Apostles, the campus, the embankment of the river Vezelka. Excursion to the museum-diorama "Kursk Bulge. Belgorod direction".
Return to Kursk.

3 steps to order one of our battlefield tours:

Going to visit Kursk, Prokhorovka and Belgorod Battlefields this year?

Our guides will take care you won't be lost. We provide constant support from meeting in airport, transportation, accommodation at the hotel, accompanied during the tour program, including the purchase of tickets to museums, etc., catering and other assistance during your stay in Kursk. We will advise you the best restaurants, stores, night clubs as well as accompany you there. We'll take care of everything for what you could worry about.